The new Comacchio line of drilling equipment is off to a strong start for Hammer and Steel and its clients, providing solid performance for jobs on the West Coast, as well as in the nation’s heartland. 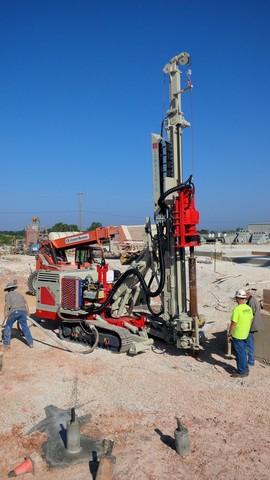 The new Comacchio line of drilling equipment is off to a strong start for Hammer and Steel and its clients, providing solid performance for jobs on the West Coast, as well as in the nation’s heartland.

Last year, Heartland Pet Foods, Inc., began construction of an $85 million pet food manufacturing and distribution center in Joplin, MO, a site which will employ up to 150 people.  Foundation Specialties, Inc. (FSI) based out of Springdale, AR, was awarded the project to install a micro pile foundation system for new process silos and tanks.

Roughly 110 permanently-cased micro piles were constructed for the foundations of these silos.  These micro piles were 7 inches in diameter and driven about 40 to 45 ft. into the ground, with a 5 ft. bonding area into dolomite.

To tackle the job, Foundation Specialties purchased a Comacchio MC 800 drilling rig from Hammer and Steel, a machine ideally set up to take on small to mid-sized drilling projects.  The rig comes with a single Comacchio CT 55/56 rotary head with roughly 9,072 ft. lb. of torque at a speed of roughly 60 rpm.  In addition, the Comacchio MC 800 drill rig is compact enough to tackle jobs that come with overhead restrictions of under 19 ft.  This machine comes with remote control capabilities, which were instrumental in completing the project for FSI.  FSI also took the rig with some additional accessories, such as a complete flushing system with a foam pump, a 360 mm extraction cylinder, a service winch, and a cutting protection device.

“The remote control capability on the Comacchio is very user friendly.  It allows for greater productivity as it gives the operator the ability to walk around the machine and see what is going on from all sides.  Also of great value to us is that with the remote control, the rig no longer requires several feet of clearance on one side or the other of the machine for the operator to stand.  We can now walk the machine right up to a drop-off without worrying about where to physically place a person,” said Paul Gintonio, president of FSI.

We serve the following areas